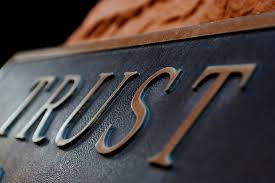 Estate agents have a trust problem.  According to the most recent IPSOS/MRBI Veracity Index only 28% of people trust Estate Agents.  That’s 26% less than Business Leaders and 54% less than the Man on the Street.
This is a serious issue for agents and one we’ve been loathe to talk about.  We have all read stories about phantom bidders, gazumping, gazundering etc and say “Well we don’t do that!”  You know that’s true, I know that’s true, but the issue is the general public does not.
As a result, when you ring a bidder and say “I have another €5,000 on that property” their inner voice goes “Does he really?”.  They don’t know you.  They know the guy on the barstool next to them saying “Nah, he doesn’t mate.  My friend Billy’s brother’s Aunt-in-law bought the house 5 doors down for €10,000 less.”  They trust him twice as much as they trust you.
This causes massive amounts of stress for everyone.  Bidders don’t trust that there’s another bid, vendors don’t trust that they should accept the offer and you’re stuck in the middle pulling your hair out.
Now imagine a world where everyone trusts each other.  Where bidders trust agents and vendors trust bidders.  What would be the result of a world like this?
Higher prices? Possibly.
Faster sales?  Most probably.
Less stress? Absolutely.
And what if clients KNEW they could trust one agent more than another?   What if they KNEW they could trust you more than your competitors?   What if they KNEW they could trust your competitors more than you?
That would be a game changer; that’s what BeagelBid brings to the table. BeagelBid is an online bidding platform for estate agents – provides a completely enclosed and transparent process where all bids are made online for standard Private Treaty sales. All parties – the bidder and underbidders, the agent and the vendor – are instantly notified of new bids on a property
It’s not about creating an auction environment in Private Treaty, it’s not about “an ad hoc” service to manage the occasional multiple bidders; it’s a whole new way to do what you do every day.  A better way of doing business that brings trust through transparency to the closed, “Black Box” Private Treaty bidding experience.  An experience which, in a world of Instagram, Facebook & Twitter is no longer fit for purpose.
According to Yale economist Robert J. Shiller trust in business has been shaken, not because businesses have become more devious but because a “great delusion” has taken hold of the general public. “As standards for trustability continue to rise, the companies, brands, and organizations (sic) shown to lack trustability will be punished more and more severely.”
So as bad as the lack of trust is now, imagine how bad it will get when the public KNOW there’s a better, more transparency, more efficient, more trustable way to buy and sell property?  The marketplace will absolutely punish agents that don’t adapt; they’ll simply go away.
By giving buyers and sellers a window into the workings of the bidding process any time, any place, the agent shows they have a sound business practice that’s being adhered to and that they are committed to being transparent. They avoid asking clients to believe in the Black Box Private Treaty process by validating everything they say. The greater the transparency, the greater the trust, the better the business.
So what has this meant for agents who have implemented BeagelBid Online Private Treaty?
Fact:  The average property goes Sale Agreed 5% over Asking Price
Fact:  The average time on market is under 45 Days
Fact:  The average property receives 10 separate bids
Fact:  Less than 1% of properties go back on the market after going Sale Agreed.
We’re not saying these facts are a result of the transparency and trust BeagelBid brings to the process, but the results speak for themselves. The simplicity and immediacy of the online bidding process makes life incredibly simple for everyone. Hours of work and stress are removed for the agent as they no longer have to field multiple phone calls from bidders. This is borne out by the very percentage of bids that are placed out of hours – the buyers just get on with it. Our experience is that it frees up days of time for the agent which can be better used for other activities – such as finding new instructions.
What we must accept is that currently the general public does not trust estate agents.  This lack of faith will only get worse as disillusionment with the archaic “Black Box” process grows and we also know what the marketplace will do to agents that don’t evolve.  There’s no need for a leap of faith when transparency and trust are readily available at the click of a button.
In a world of ever growing transparency, trust becomes the competitive advantage.

Is Time Running Out For The Analog Estate Agent?

Real estate is an unusual business in that there are effectively no repeat customers. Every day you’re starting again to get new instructions; no matter how big or how small your agency is. So it stands to reason that staying on top of new technology and being a leader in the industry is massively important in staying ahead of the pack.  So why are so many estate agents afraid to innovate? Every other industry has undergone a digital revolution.  From entertainment to banking, from retail to restaurant, every industry is making things easier for users so they can get an edge on the competition.  So why are real estate agents laggards?  What are they risking by waiting for someone else to go first? The vast majority of estate agent customers make first contact digitally - either through a portal or from the agents own website.  How many houses have you sold to people who have walked in off the street? So why don’t we make it easy for buyers to make offers through the same website they

This is a question we get asked quite often.  As you know, Beagel offers two products BeagelBid, private treaty service and BeagelSold, online auction service.  So why is the latter not called “BeagelAuction”? I hear you ask.  Good question. It’s really about case implementation, auctions are an event into themselves.  A property normally goes for auction as a choice of sales approach from the outset.  And while this is certainly a use for BeagelSold, we see the technology more as a closing tool.  It’s probably best explained with an example. Recently an estate agent had a property for sale.  It went on the market by offline private treaty bidding.  People viewed, offers came in. There was a lot of interest, in fact 8 different people made offers on the property.  The price had reached a point that the vendor was happy with, the next issue was how to actually close the sale.  As we all know, selling is one thing - closing is another. So the agent decided that they would stop taking

Valuations are a necessary step in the home sale process.   There is a lot of confusion out there regarding the truth about valuations.   Some people are confused about their purpose and often think of them as surveys.   Some people think that a low valuation for their home is the kiss of death.   People should take the time to learn the facts about property valuations.   The more people learn beforehand, the better prepared they will be to tackle this crucial step. The mortgage approval is contingent upon the results of the property valuation. It is as simple as no valuation…no loan.   Since very few people have the ability to pay for a house with cash, the valuation is going to be necessary.   A loan is never going to go through without an valuation.   The purpose of the valuation is to establish the home’s market value. The main goal of the valuer is to protect the lender.   Lenders don’t want to be stuck with property that is not worth its price tag, so the valuatio